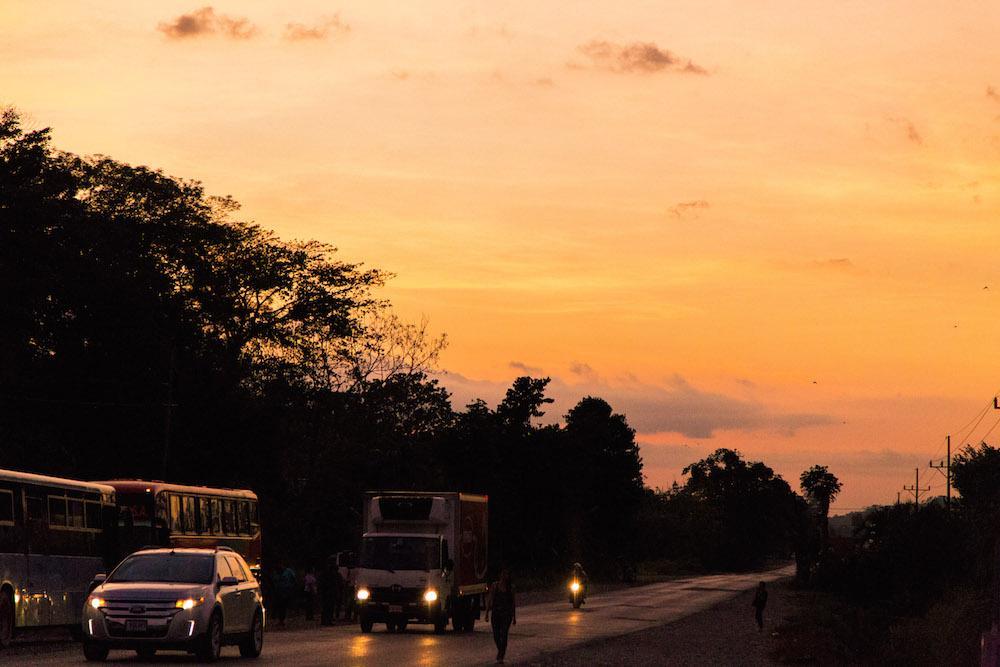 The rented van bumped along the rural thoroughfare, twisting sharply to avoid potholes and oversized rocks blocking the path. Our journey led down one of Costa Rica’s improved dirt roads, packed tight with a layer of gravel that would gradually erode over the upcoming rainy season. And although the tropical showers had not yet arrived in full force, a wry grimace spread over most faces as we jolted down the upgraded lane.

We were headed towards an evening of cross-cultural ministry, preparing to serve at a small but vibrant church in a nearby town. In spite of the ambient clatter, we chatted excitedly about the evening ahead. It was our team’s first outreach, and we were eager to watch God show off in unexpected ways. As we jerked and swerved our way towards the destination, we shared ideas and impressions about how the night might run.

Suddenly, one of our group cried a smoke alarm. Can you smell that?! Within moments, a steady stream of voluminous grey filled the van from under the front console. Our driver pulled aside, shutting off the vehicle as we clambered out, willy-nilly, hacking and sputtering.

After a few minutes of assessment by our handy traveling Toyota mechanic (who just happened to be a member of our team), the picture was bleak. The van was dead and we weren’t going anywhere. Many kilometers yet from our destination and surrounded by dusky jungle, we were most definitely stranded. Eventually, one member of our group was able to thumb a ride from a gracious passerby in hopes of hailing taxis in the next town. We settled down to wait.

It was drizzling. Our team leader popped an umbrella. We huddled together.

Because the enemy’s deterrents should never become our final destinations, only our detours.

And we asked for eyes to see and boldness to declare the plans of God, victorious always over the schemes of the wicked one.

Eventually, we joked and chatted, wondering as night began to settle how things would shake out. And just as it began to be too inky to see much farther than our neighbor’s face, two cars popped over the rise, lights blazing like a search beam on a rescue float.

Managing to squeeze into the two small taxi sedans, we continued our trek. However, it wasn’t twenty minutes later when one of the cars pulled into a small drive and a phone in the second car rang. We have to pull over for a couple of minutes. The taxi driver wants to embrace Jesus as his savior. The pause was filled with exaltation. Another son for the King.

When we finally arrived at the unpretentious church, a bit tardy and a bit worn, joy was already spilling from the open door, accompanied by the warmth of pumping drums and electric guitar. The single room vibrated with the dance of eager worshippers, and we were instantly swept into the celebration. Praise resounded; God’s word was delivered. And in the hungry atmosphere, the Spirit began to move. Healing broke out; hearts were made whole. Relationships moved into sound standing; destinies were declared. It was a party of the very best sort, the kind where all things broken become properly set, and no aching soul returns home empty.

Our newly hired drivers had been heartily welcomed, and as the evening progressed, their smiles had broadened. God was good and His heart for His children was undeniable: the steadfast love of the Lord never ceases; His mercies never come to an end. When at last the doors were closed and lights flicked off, we piled back into the twin taxis to receive our last surprise of the evening.

The second driver, Davis, pastored a modest church down the way. Would we be willing to come and minister to his small flock? He was so hungry for his dear ones to feed on the sweetness which the Lord had demonstrated that night.

And we marveled. The whole way of the long trek home, we couldn’t hold back the wonder. Because in our very real, inherent weakness, and in the midst of a true and honest discouragement, the God of the universe had woven something astounding. The thread of redemption, so often hidden or covered over in the warp and woof of our lives, had been Holy Spirit-highlighted so boldly that it blazed golden across our vision.

And that calling, it’s for all of us, for us who name ourselves with the brand of fidelity’s awl, pierced to remind ourselves of His ultimate piercing. Given over as slaves of love to the One who gave everything. Bondservants of the living God.

Jesus had taken what we couldn’t have begun to apprehend and had made it a glorious part of the plan. Yet even more rightly, it had been the plan all along. We couldn’t wait to join Davis in just a few days to love on his band of believers. We couldn’t wait to encourage our new brother in the Lord, our first taxi driver.

And we just couldn’t wait to spot what was next around the bend.